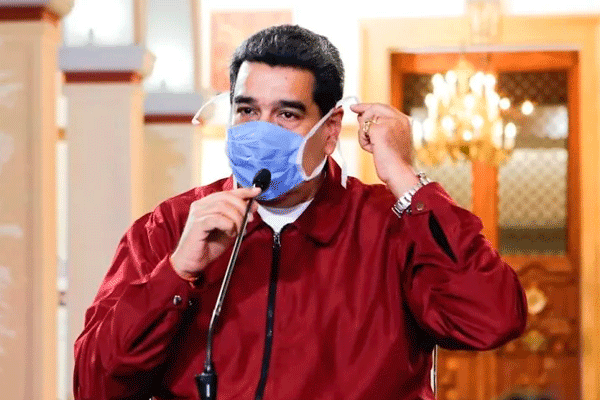 The media hyenas had predicted a health disaster. "The health system is absolutely incapable of coping," announced Le Figaro. Le Monde mentions "a health system devastated by the coronavirus" while AFP sneers: "garlic and lemon tea against the coronavirus". Of course, the small media and academic grunts of neo-liberalism have been careful not to explain to the few readers who still believe them that Venezuela is a victim of a criminal blockade by the United States and its vassals. A veritable economic war that prohibits trade in oil with that country, and deprives the government of a not inconsiderable manna of foreign currency when it comes to importing medicines, surgical and sanitary materials, food, and spare parts for industry.

To drive the point hone, on March 12, 2020, as soon as the World Health Organization announced the Covid 19 pandemic, the United States reinforced the blockade against Venezuela. The Russian company (a subsidiary of Rosneft) TNK Trading International, which traded Venezuelan oil, was sanctioned. Its assets and accounts in the USA frozen. This sanction, which is added to a very long list since 2014, results in reducing the possibilities for the Venezuelan government to face the threat of the Coronavirus by hindering medicines, reagents, and masks imports.

On March 18, 2020, as part of the fight against the coronavirus pandemic, Venezuela requested $5b from the International Monetary Fund via the Rapid Financing Instrument of the financial institution. Although the IMF has released funds to help "vulnerable" countries, Venezuela's request was rejected. Its spokesperson indicated that "the Fund is not in a position to consider this request" because the IMF's action is "based on an official recognition of the government by the international community (...) There is no clear recognition at this stage". Ideology and the war against Venezuela take precedence over the defence of humankind.

Yet Venezuelans know how to be resilient. Nicolas Maduro is aware that managing a global health crisis in these conditions is no easy task. As soon as the pandemic was announced, and in anticipation of its spread, the Venezuelan president decreed a national emergency and the confinement and closure of public places. Toying with the people's health is off the table. Especially since Venezuela is under the permanent threat of military intervention, and the coronavirus could give some people ideas. The newspaper El Nuevo Herald published an open call to take advantage of the pandemic to launch a coup d'état against President Maduro.

Far from bowing to the pleas of the opposition ultras, the Venezuelan army lent a hand during the first days of containment. Not in order to repress those who broke out of their voluntary confinement, but to disinfect all the country's major cities and public transport. 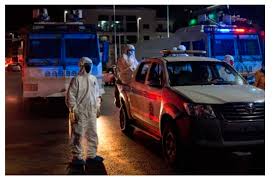 On 22 March, one week after the confinement, President Nicolas Maduro announced new measures. He decreed:

✅The suspension of rents for individuals and merchants for 6 months.
✅The prohibition of dismissals until 31 December 2020
✅The suspension of water and electricity bills for 6 months
✅The suspension of consumer or mortgage loan repayments
✅The massification of the public home food-aid distribution programme (CLAP)
✅The generalization of wage adjustment vouchers (universal income)
✅The State covers SME salaries for 6 months
✅State credits are granted for companies in the health, food, pharmaceutical and hygiene sectors.

Venezuela, aware that the criminal blockade of the United States could affect its health response capacity, has strengthened quarantine, but above all has provided its population the means to be confined. Everyone can assess the relevance of those measures in comparison with those taken in his or her own country.

In contrast to its neighbours, Venezuela has long placed the human being at the centre of its government's concerns. To cope with the drastic drop in oil prices, in 2016, it switched from a system of generalized subsidies to a system of allowances that take into account income, household composition, age, etc. The government has also decided to increase the number of people living in the country. A system comparable to the French Caisse d'Allocations Familiales (Family Allowance Fund), but a more elaborate version of the same: the Systema de la Patria (Fatherland System). Every Venezuelan can register freely and receives the Carta de la Patria, which enables him or her to apply for government benefits and assistance. This system, commonplace in a welfare state, was to become, under the bile of media propagandists, a device of totalitarian control.

However, it is thanks to this system that Nicolas Maduro's government will be able to face the Covid 19 threat. From the very first days, a major investigation was launched through the Internet application of the Homeland System. On 23 March, 10,965,969 Venezuelans had responded to the state health census. 21,801 Venezuelans reported experiencing flu-like symptoms. In return, 13,808 doctors were mobilized (mostly Venezuelans, but also Cuban doctors, as in Italy) to go to their homes to diagnose complainants. As of 22 March, 17,550 people had been examined in this way. 77 people were diagnosed positive at Covid 19, and were transferred to care centres set up for this purpose. While private insurances refused to cover medical expenses related to Covid 19, the Venezuelan State will take care of each of the patients free of charge. Their families or relatives the infected persons shared containment with were placed in isolation for 14 days in order to determine whether they had been contaminated. There are currently no deaths related to Covid 19 in Venezuela. 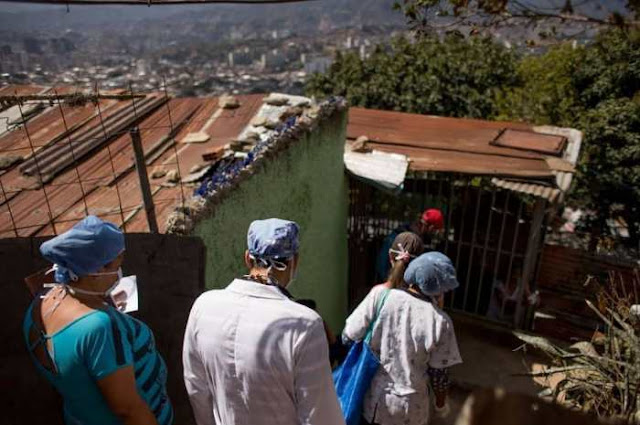 On March 23, 2020, the government announced that, by means of Chinese assistance, it will have two million tests for Covid 19, and that it will use chloroquine treatment to cure sick people. This anti-malarial drug had had convincing results in China before French professor Didier Raoult perfected the treatment protocol. The French will surely appreciate knowing that Venezuelans will be able to use this treatment while, at the same time, French health authorities are dragging their feet, and most of the media have been pouring a torrent of mud on the Marseille doctor for a long time.

Beyond Venezuelan health policy, which everyone can assess by comparison with their own country's protocols, Venezuelans rely on a formidable network of grassroots organizations. From the very first days, when private pharmacies increased the price of masks and hydro-alcoholic gel by 1000%, neighbourhood organizations began to make masks to distribute free of charge in their neighbourhood communities. In many communes and communal councils, health committees take a census of people, organize solidarity, food distributions and transmit the necessary information on the disease. Whether in working-class neighbourhoods, in socialist communes, or in the 2.5 million public housing units built by the Bolivarian Revolution between 2011 and today, social relations are the cement in the fight against the pandemic.

Unlike in France, the notion of "living" in many territories of Venezuela is part of the common organization of space and collective decision-making. The notion of confinement is therefore experienced differently, and calls us in the West to question the non-existence of common construction in our neighbourhood relations.

Venezuela has already experienced an institutional crisis that has been overcome. Today, President Maduro's call for containment is respected by all sectors, while Juan Guaido continues to clown around from his hotel room. France, for its part, is plunged into a crisis of legitimacy. The political authority of the State having been publicly challenged by the moral authority of the infectiologist Didier Raoult. Already, local elected officials are refusing to count the dead while waiting for the green light from the French state. Thus, the mayor of Nice, Christian Estrosi, decided to abandon the protocol ordered by the State to follow in the footsteps of the Marseilles professor in his city's university hospital. While Venezuela is united behind the revolutionary state, France seems to be returning to the feudal system.

Stock shortages in French stores, speculation and price rises for a number of products, thefts of protective masks (and perhaps tomorrow the black market if the confinement continues) are some of the symptoms of the economic war that Venezuela has been experiencing for several years. Unlike France, Venezuelan citizens are already prepared for this kind of situation, and have developed collective solutions to make up for the shortages.

Finally, Venezuelans have been accustomed to media and psychological warfare for several years. They know that when information comes from the commercial media, they should not dwell on it for a minute. In France, if Professor Raoult's studies are confirmed, the media system will have to be held accountable for treating the Marseilles doctor as a charlatan. As is often the case, Le Monde and its "decoders" have been awarded the prize of disinformation for having maintained that the chloroquine treatment in Marseilles was a fake news.

While several countries have already adopted this treatment as a matter of urgency (China, Venezuela, United States, Argentina...), the French media have already been jointly responsible for thousands of infections and hundreds of deaths. The Venezuelans already know how to react to this propaganda system and to psychological operations. Here in France, we are barely learning, and we will not forget.

Once again, the media and academic hacks are waiting to see how the Bolivarian Revolution will succumb to the Covid 19 pandemic. They might well have to chafe for quite some time yet and spend their quarantine drowning in bitterness.

As Emmanuel Macron said, "the day after will not be a return to the day before. Many certainties and convictions will have to be challenged". Let us hope that those who have been contaminated by the virus of disinformation about Venezuela, do not ignore the recommendations of the French president.