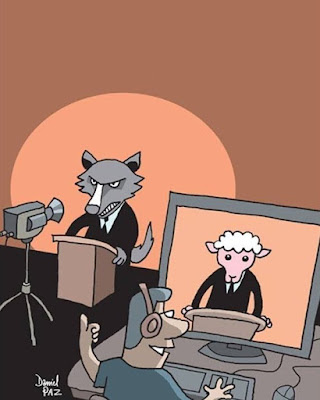 The French President, Emmanuel Macron, ordered Nicolas Maduro not to repress the opposition but HE FORGOT the 3,300 arrests and 2,000 wounded linked to the Suppression of the Yellow Jackets.

The President of the Spanish government, Pedro Sánchez, gave eight days to Nicolas Maduro to call elections but HE FORGOT that he is in his position only due to a vote of no confidence and not by free elections.

The President of the United States, Donald Trump, accused Nicolas Maduro of not being legitimate as he was elected with just 30.45 percent of the registered voters but HE FORGOT that only 27.20% of voters in the US voted for him.

The Colombian President, Ivan Duque, rails vociferously against the "Venezuelan narco-dictatorship” but HE FORGOT that 65% of the cocaine in the world is being produced in Colombia, under the complacent gaze of that country’s authorities.

The President of Brazil, Jair Bolsonaro, is concerned about human rights in Venezuela but HE FORGOT his statement branding social movements that oppose his policies as terrorist organizations.

The Argentine President, Mauricio Macri, accuses Nicolas Maduro of being corrupt but HE FORGOT that his name, and not that of his Venezuelan counterpart, appears in the outrageous list of the Panama Papers.

Portugal deplores the Venezuelan crisis that has pushed, according to the UN, 7.2% of Venezuelans to migrate but this country FORGOT that 21% of the Portuguese had to leave their country to live abroad according to the same UN sources.

The Peruvian President, Martin Vizcarra, speaks of a dictatorship in Venezuela but HE FORGOT that he was named President without any popular vote, but to replace the previous President ousted by corruption.

In the United Kingdom, its leaders denounce threats to freedom of expression in Venezuela but THEY FORGOT that they are keeping journalist Julian Assange detained under threat of arrest without any legal reason.

Belgium is concerned about the economic situation in Venezuela but FORGETS that, in Brussels, the Euroclear company retains 1.250 billion dollars belonging to the Venezuelan State, seriously affecting the country’s ability to purchase vital supplies of food and medicines.

In the mouths of the propagandists, Venezuela has become part of the "school of the upside-down world", as described by Eduardo Galeano. False accusations, repeated over and over again by the army of media columnists, seek to legitimize any warmongering act against the Bolivarian Republic of Venezuela in the forum of international public opinion.

The media bombs have already started to fall.