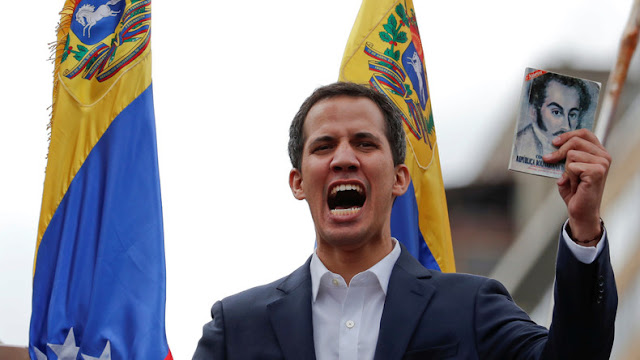 Let's start by asking our readers in France some questions.

Imagine that the highest Chinese authorities are calling on Yellow Vests to take the streets of Paris and major French cities.

Imagine that Russia decides to no longer recognize President Emmanuel Macron and declares that the new legitimate French president is Marine Le Pen or Jean-Luc Mélenchon.

Imagine that Iran is funding and arming paramilitary groups to set the country on fire and destroy it.

What would you call it? No matter what opinion you have of President Macron, would you be willing to accept such foreign interference in the affairs of our French Republic?

Incongruous situation? And yet this is exactly what is happening in Venezuela.

It cannot be said that the scenario had not been advertised. As early as Jan. 8, two days before Nicolás Maduro's swearing in, the Venezuelan National Assembly illegally passed a Transition Law in order to seize the executive power (president). The United States and its allies in the Lima group were quick to support this putschist initiative.

Before going any further, let us remember that the National Assembly has been in a situation of contempt of court for almost two years. After the election of deputies in December 2015, the United Socialist Party of Venezuela (PSUV) candidates in Amazon State filed a complaint because their opponents had purchased votes to win the election. The court subsequently condemned the fraud and the Electoral Power Tribunal demanded that the election for these three seats be redone.

It should be noted that the opposition holds an absolute majority of 122 deputies out of 167 seats. This insubordinate Legislative Assembly has therefore become a parallel legislative power. However, it is this body that is making the attempt at an institutional coup d'état, which we are currently witnessing.

On Jan. 22, while several demonstrations were being prepared in Caracas, U.S. Vice President Mike Pence called on Venezuelans to rise up against the legitimate government. This clearly shows that opposition political organizations have so little legitimacy that Washington must directly call -- without an intermediary -- on Venezuelan citizens and the army to overthrow Nicolas Maduro, in order to satisfy U.S. interests.

The next day, as expected, as soon as Juan Guaidó illegally took over the executive power, the White House "officially recognized the president of the National Assembly as interim president of Venezuela."  A handful of Latin American countries, subservient to Washington, will follow Trump's order to recognize his Venezuelan Gauleiter [name Nazis used for their leader of occupied country]. 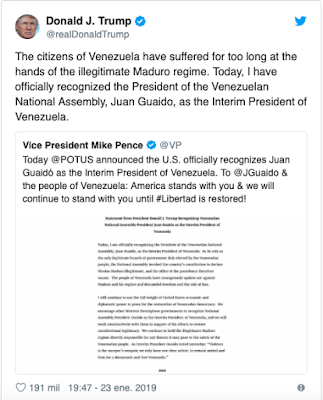 The creation of parallel powers is nothing new. As early as 2017, the opposition created a parallel Supreme Court (based in Panama), and a post of Attorney General of the Nation (based in Colombia). Now, with the usurpation of executive power by a National Assembly in contempt of court, we are facing the construction of illegitimate public authorities, recognized by the USA, Canada and their Latin American vassals.

Since these bodies obviously cannot coexist with legitimate powers, there will undoubtedly be an upsurge in violence in the Bolivarian country. It is in this sense that Washington's refusal to comply with the expulsion order of its Caracas diplomats, immediately announced by President Maduro, must be interpreted.

This scenario reflects the situation that preceded the Libyan and Syrian wars. The formation of parallel governments, whether the Libyan National Transitional Council or the Syrian National Salvation Council, has been a prerequisite for the bombing of these countries, or for unleashing mercenary attacks on them. During the night of Jan. 23, gangs of armed criminals carried out a reign of terror in some parts of Caracas by shooting at everything that was moving and clashing with the police.

It should be recalled here that the National Assembly, which is today the main instrument of the institutional coup attempt, has approved all of Washington's economic sanctions against its own [Venezuelan] people. Worse still, on Jan. 8, 2018, it paved the way for the devastation of the country by authorizing the creation of a trust fund to reclaim the assets of the Bolivarian Republic of Venezuela.

Hiding its intentions behind the fight against corruption, the National Assembly allowed foreign countries to freeze the assets of its own country. Here again, this reminds us of the strategy deployed in Libya and the freezing of that country's assets.

Washington and its allies can count on bands of mercenaries, recruited to spread violence in Venezuela. In addition to the Colombian paramilitaries, who are very active on the Colombian-Venezuelan border, President Maduro reported, on Nov. 28, the presence of 734 mercenaries on military bases, on Eglin AFB in Florida and on Tolemaida in Colombia. Their goal was to attack Venezuela or to prepare a false flag attack in order to justify military intervention against the Bolivarian nation.

In the short term, the outcome of the showdown we are witnessing can only be, unfortunately, violent. Neither Nicolas Maduro's legitimate power nor the dummy bodies created by his opponents will retreat or engage in dialogue in the immediate future. In any country, Juan Guaidó and the felonious Assembly members would find themselves behind bars. Venezuela must deal with the threats made by the USA.


‘All options on table’

President Donald Trump stated that the military option against Venezuela remains valid ("all options are on the table"). As for the State Department, it has already announced that it is preparing to send "humanitarian aid." Nicolas Maduro's government, which is fighting to have the financial blockade against his country lifted, will never accept that the USA should disembark under the pretext of "humanitarian aid." This provocation is part of a planned strategy that former SouthCom Commander John Kelly had mentioned on 28 October 2015: "The United States will intervene for humanitarian reasons, if asked to do so". This has now been done. 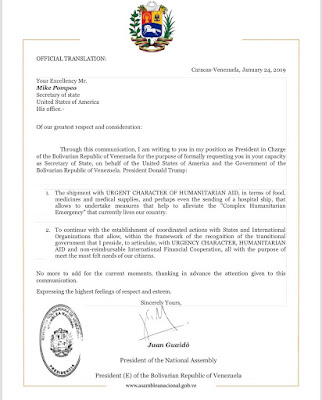 Faced with this escalation of tension, all that is missing is a detonator to justify a war adventure. Let us remember the media lies that plunged Iraq, Serbia, Libya or Syria into the destructive abyss of war: the alleged destruction of incubators in Kuwait, the Raçak massacre in Serbia, the bombing of demonstrations in Benghazi, Libya, or the torture of teenagers in Deraa, Syria were all the necessary prelude to legitimizing massacres in the name of the "Defense of Humanity."

International public opinion could once again be the victim, in the coming weeks, of a media intoxication operation in order to justify a military operation against Venezuela.

Although the Venezuelan scenario looks similar to those deployed in the Levant, there are still some significant differences. On the one hand, the Venezuelan army continues to support its country's Constitution, its national sovereignty nation and the republic. While 20 soldiers were arrested on Jan. 21 for trying to appropriate a weapons depot, the tens of thousands of soldiers and hundreds of thousands of reservists did not show any interest in a coup. The Minister of Defense, Vladimir Padrino Lopez, recalled that the Bolivarian National Armed Forces "defend the Constitution and are the guarantors of national sovereignty." 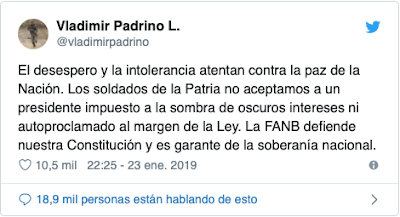 On the other hand, Russia, China, India, Pakistan, Turkey, Iran, South Africa and a vast majority of countries in the world recognize the legitimacy of President Maduro. Beijing has supported the Venezuelan government in its "efforts to maintain its sovereignty." The Kremlin, for its part, assured Caracas of its support to "ensure that Venezuela's sovereignty is respected."

It is true that the Venezuelan opposition has done everything possible to provoke the allies of the Bolivarian Revolution. By claiming loud and clear that the credit lines authorized by China and Russia or the economic agreements signed by President Maduro would not be recognized by "their government," they have de facto internationalized the Venezuelan conflict.

Beijing, Moscow and Ankara are now indirectly targeted by the anti-democratic designs of the Venezuelan opposition. An intensification of the current conflict or a military adventure would have repercussions far beyond Venezuela's borders.

This Cold War could well warm up under the Caribbean sun. It is now up to all peace activists to mobilize against intervention and for a political solution to this new offensive against the Bolivarian Revolution. Let us not allow the warmongers to spill blood that is not their own.