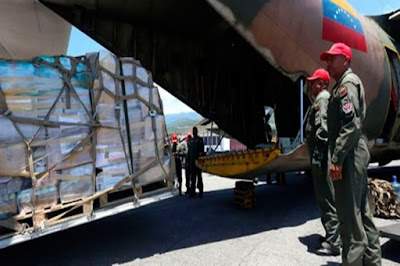 Hurricane Irma has just passed through the Caribbean, in a procession of tragedies that have destroyed lives and left material damage behind.
In response to this natural disaster, Venezuelan President Nicolas Maduro sent humanitarian aid to Cuba, Antigua and Barbuda (with 95% of buildings in Barbuda destroyed), and the French colony of Saint Martin on September 10.
Speaking from Caracas airport, Venezuela’s Minister of Interior Nestor Reverol Torres said the donation, including 10 tons of clothing, mattresses, potable water and non-perishable food, was being done within “a framework of respect and solidarity with the people of Saint Martin”.
He said the humanitarian aid would be delivered by a Venezuelan military plane as “part of the international cooperation that falls within the framework of the Bolivarian Alliance for the Peoples of Our Americas (ALBA)”, the solidarity-based anti-imperialist trading bloc initiated by Venezuela and Cuba in 2004. 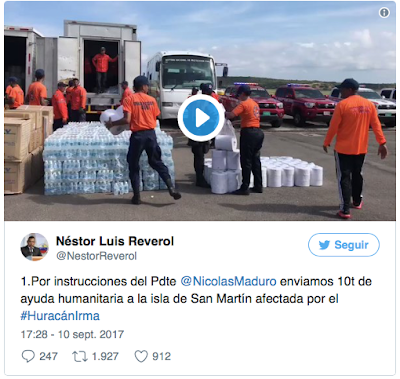 Few media outlets in Paris paid attention to this gesture by the Bolivarian Republic of Venezuela. Yet it raises questions that few journalists have bothered to ask; the same journalists who only a few weeks ago were so willing to repeatedly denounce Venezuela.
This precious help, from a country facing an economic crisis, has exposed the incoherence of the position taken by French President Emmanuel Macron.
Only three weeks ago, Macron called the government of President Nicolas Maduro a dictatorship. What mystery of our diplomacy explains why France now supports cooperation ties, of whatever type, with an undemocratic regime? Is there any coherence in our country’s diplomacy or did Hurricane Irma disorientate our foreign policy?
Why is the French government authorising a military plane that has come from a dictatorship to land on our territory?
Given France continues to be sovereign in both its management of risk situations and natural disasters, it must have authorised the arrival of aid from the Venezuelan government.
And if, as foreign minister Quai d'Orsay said on August 30, France should “evaluate our relations with Venezuela on the basis of the rule of law and fundamental liberties”, then it would seem that the updating of diplomatic ties amid the ruins of Irma indicates that Paris has “evaluated” the political situation in Venezuela in a positive light. Recent declarations by our ambassador in Caracas also point in this same direction. 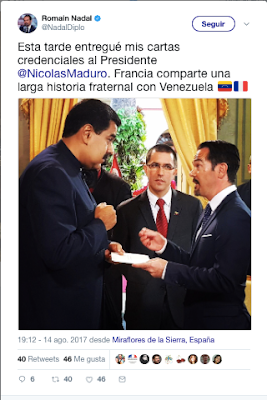 The French government knows the Venezuelan government is no dictatorship. But for media and political purposes, the president has decided to subordinate our country’s diplomacy to dodgy political tactics against the left-wing La France Insoumise (FI, France Unbowed).
Macron has sought to use the state apparatus for his own party’s purposes, which is extremely worrying.
How could it be any different? As each day passes, the pro-people proposals contained in the FI’s program, “A Common Future”, as shown to be correct.
The humanitarian aid sent by Venezuela occurred within the framework of regional solidarity promoted by ALBA, which includes various Caribbean countries. This is the same famous ALBA that FI leader Jean-Luc Melenchon wants France to join, much in the same way as France participates in other regional bodies, such as the Organisation of Eastern Caribbean States, the Caribbean Community (CARICOM) and the Association of Caribbean States.
As far as we know, no other regional organisation has sent aid to victims in Saint Martin.
What will the members of the media-political caste do now? Will they protest against the humanitarian aid sent by ALBA to our compatriots? Will they dare, after Irma, to raise the FI’s proposal that France join ALBA?
And what will Macron do during his trip to the area? Will he publicly thank the “Venezuelan dictatorship”? Will he launch a process for France to join ALBA?
It seems the tailwinds of Hurricane Irma have considerably damaged what little coherence was left within the French state.