Venezuela's Incoming Parliamentary Opposition Is the Only Hope 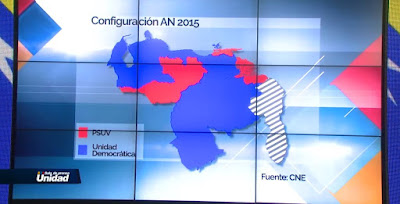 The parliamentary elections on Dec. 6 handed an indisputable victory to the enemies of the political process undertaken by Hugo Chavez and the people of Venezuela over the past 17 years. The conquest of the National Assembly by the neoliberal right is no small thing. Even though Venezuela, like many other democracies in the world, has a presidential system in a federal, centralized state, there is still enormous legislative power. Hence, for 16 years the laws that supported the vast majority of the revolutionary changes were enacted, including the decree-laws that were made possible by the Enabling Act passed in the assembly. Although this power was often overshadowed by the figure of President Hugo Chavez, the achievements of the Bolivarian revolution were only possible thanks to the joint work of the legislature and the executive to change the lives of the country’s citizens.

The political spokespeople for capital have distinguished themselves in the recent political history of the chamber by opposing everything proposed by Chavez — not by choice, but because the representatives of the Bolivarian people were involved in constructing a legal scaffolding to strengthen the common good, and that affected the capitalist interests of the political representatives of the right. While the revolution dedicated itself to building a legal base in the public interest, the right advocated for the particular interests of a minority.

After Sunday, the legislative political game has been turned on its head. From now on, the main characteristic of the rightwing — oppose everything — will not work. They now must reveal to the country what their real political choices are, and in whose interests they are going to legislate. Consequently, a semantic shift occurs: the opposition to the new national project, soon to be hegemonic in the national assembly, is us, the revolutionaries!

The only thing we can agree on with the counterrevolution is that it a change will happen. To really understand what this will be, just review the government program the MUD coalition brokered Jan. 23, 2012. Many of the future actions of the MUD are contained in this manifesto, which consists of 1,237 items. Many members of the new parliamentary majority participated in the writing of this neoliberal program. We can predict that they will now consciously apply the policies they conceived, which will now be examined.

Although during the electoral campaign they did not inform the people of their true intentions, the MUD emphasizes the need to review "the whole body of legislation to conform to a comprehensive vision of a new legal framework to restore the democratic nature of the republic "(article 162 of the MUD program) — i.e. demolish the entire legal apparatus that has allowed the development of policies for the people.

In terms of the economy, the MUD legislators promised the electorate they would end the crisis. As we know that the MUD can not drive up oil prices at the international level, the question is who will pay for the consequences of the collapse in oil prices: the people or the privileged classes? Again, Venezuela's right-wing program outlines the answer: end price controls on staple products to "stimulate private activity" (art. 420); reform land and fishing laws; reform the Food Sovereignty Act in order to "ensure economic freedoms" (art. 547); and reform Popular Economy Act (art. 125) and the Law for the Defense of People's Access to Goods and Services (art. 147). In other words, they aim to reform all the laws that protect the people from market dictatorship. Similarly, they plan to remove the controls on exchange rates, as proposed in art. 406, which would cause a sharp devaluation that may drastically destroy the purchasing power of the working middle classes.

Jose Guerra, one of the authors of the MUD's economic program and a new Caracas city legislator, said the new assembly will reform the Law of the Venezuelan Central Bank (BCV). While this may have seemed quite an abstract prospect to voters at the time, they may well come to resent him for it. Throughout the past 16 years, the right always whined about the fact that monetary policies are tied to the decisions of the elected government and serve the coordinated development of their nation. By transforming this law, liberal economic models will be able to take hold. To enable this, the MUD advocates, in art. 408, strengthening the autonomy of the BCV and prohibit this entity from financing public spending and allow deficit policies, which could, perhaps, have an impact on inflation, but at what social cost? Where will they get the money to strengthen education and healthcare, not to mention the social programs that the Bolivarian government has maintained in spite of the crisis?

During the election campaign, the plans of these new right-wing legislators were not up for debate. When MUD politicians spoke of freedom of expression to their constituents, they failed to specify that part of their plan is to tweak the TV and Radio Social Responsibility Act (art. 124) and the Telecommunications Act (art. 1147) to eliminate critical voices, criminalize community media and re-offer the spectrum to private communications companies. When they shouted, enraged by full democracy, they did not mention their plans to reform the National Assembly Law of the Federal Council of Government (art. 276), the Law of Community Councils (art. 289), the Law on Municipalities and the People's Power Law (art. 125).

They promised villas and castles to a population weary from a terrible economic war, but kept quiet about their desire to overturn the legislation that allowed the oil industry to be the economic engine of the process of revolutionary change (art. 512 and 275). They unsuccessfully incited rebellion over the years, calling on the military to revolt, without saying they will review the Armed Forces Law and the National Security Law (Art. 100) in order to "reorganize and reformulate the military institution" (art. 99); remove the “Bolivarian Militia,” or civilian reserves (art. 101), and generally aim to untie the military community from the future of the nation. In sum, return the army back to its role as a facade that parades on July 5 and repress popular rebellion should it occur.


The incoming National Assembly is brewing a legislative offensive against the Bolivarian revolution that will seek to re-subordinate the public interest and welfare of the majority to the interests of elites. In the looming political and public-relations battle, Chavismo must assume its role reversal in the parliament: to call out the strategies of the parliamentary majority and oppose the destruction of a legislative apparatus built over 16 years. In other words, create an opposition policy for the good of the people!
Envoyer par e-mailBlogThis!Partager sur TwitterPartager sur FacebookPartager sur Pinterest
Article plus récent Article plus ancien Accueil