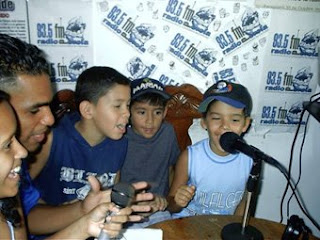 “This is Radio Perola, 92.3 FM…the radio of the community!"… This echo is heard in the heart of the run-down skyscrapers of fifteen stories high; called “bloques” of Caricuao. In addition to this media outlet, Venezuela counts 447 alternative radio stations, but also 25 television stations and 120 community newspapers throughout the country. These media outlets were created by and for the community so it can have a place to convene, make its complaints, share information, and create its neighborhood identity


In the heart of the Caricuao bloques, located in the southwest of Caracas, one can hear the radio going: “This is Radio Perola, 92.3 FM…the radio of the community!". Radio Perola is one of the numerous community media outlets in Venezuela.

These new media outlets were created by and for the community, and provide an alternative to the dominating cultural industry.

"Our Radio station came to light as a result of a terrible disinformation campaign orchestrated by Venezuelan private media outlets, not only against the government, but also against popular communities,” explained Carlos Lugo, coordinator of Radio Negro Primero, located in Sarría, in the downtown area of Caracas.

Community media outlets were created to provide the people of Venezuela with another communicational tool. People needed a media outlet to represent them, as well as the people producing and broadcasting programs. The Venezuelan State has sponsored this initiative by launching Hertzian channels and passing a Law which sets forth their requirements, obligations and needs.

By now, the Bolivarian Venezuela counts 120 newspapers, 25 television stations and 447 alternative radio stations throughout the country. In order to obtain the authorization from Venezuelas Telecommunications Commission (CONATEL), television stations must have technical equipment for broadcasting and transmission; financial support; and a social aim which involves the community and its popular organizations.

Community media outlets have joined the National Community, Alternative and Free Media Association (ANMCLA) to convey the development of all alternative media outlets, coordinate actions, and solve problems which could arise.

In the facilities of Radio Negro Primero, Manuel, a 12-year old boy, seemed to be very busy with his computer, but I stopped to talk to him anyway, and he said: “I come here after school or when I don’t have school to help out my uncle. We sometimes type reports about the community…we wrote one last week about the rights of children. I’m learning how to use radio equipment…it is so cool!”

Community media outlets usually open their doors to children like Manuelito at a certain schedule with the purpose of teaching them broadcasting techniques, how to produce children’s programs and share ideas with the public.

More than just simple media outlets, community media outlets are the communicational epicenter of the community. Their purpose is to create awareness, provide education, and address issues which concern the population such as initiatives carried out by grassroots organizations and to solve problems in the community, among other topics.

Land and Health Committees, Bolivarian Circles, Endogenous Battle Units, schoolchildren, housewives, professionals, in other words, all sectors of the community have taken possession of these media outlets and use them to talk about their actions, projects, concerns, and urge the people of Venezuela to participate in the process of political and social changes underway in the country.

Carlos Carles, a founding member of Radio Perola stated "people from Barrio Adentro, Sucre and Ribas come here to remind people of these social programs and how they work”.

Community radio stations are places where citizens can convene and find solutions to rebuild the social sector. In the past, people were not as concerned about problems in their communities, but today, they believe that the place where they live and their relations with neighbors are essential for healthy and integral social development.

For instance, Radio Perola participants are getting ready to carry out an identification drive here. Over the past week, Caricuao residents have been provided with information about the papers they must submit to obtain their I.D. cards.

It is common to read in the opposition print media that alternative media outlets are at the service of the government. However, according to the Community Media Law, they must be independent of all political or religious factions and cannot occupy a high-ranking position in the public administration.

These conditions do not prevent the community from solving their problems politically and if participants side with the Venezuelan President, they do it on their own.

In general lines, communication among alternative media outlets must be the permanent sharing of ideas and projects and emotions and hopes. This new type of media communication is not only aimed at benefiting society or linking the community with, projects, but also at encouraging people to participate in the ongoing process of changes in the country. Community media outlets are opening a communicational space and they are building another world inside it.