Urban land committees give identity back to poor communities 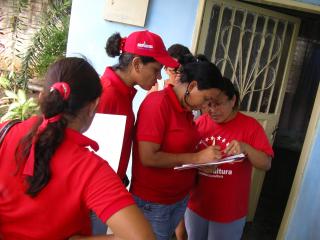 After Presidential Decree 1.666 was promulgated in 2002, which refers to Land Ownership Regulations, 5,654 Urban Land Committees (CTU) were set up in Venezuela. Part of their objective is to conduct censuses, deal with cadastral matters, work with the land ownership administration and even bring the historic memory back to poor communities

The thousands of small lights that glow on the hillsides of Caracas during the night time, makes one want to think about the Milky Way that fades into the distance. But at dawn, reality quickly hides this starred landscape. The hundreds of thousands of farms installed on the hills of the Venezuelan capital make up the impoverished neighborhoods which surround the city.

From the 50’s, drawn by the dream of improving their living standards, millions of farmers from outside Caracas moved to the big cities. Caracas is one of the main destinations of this rural exodus. Nevertheless, it was often a disappointment upon arrival. In order to find a place to live, new residents had to illegally build improvised homes on the surrounding hills.

The situation remained the same for more than 40 years. Previous governments did not even try to solve the housing problems of these Venezuelans. Without the possibility of obtaining land ownership titles, residents were sentenced to social exclusion: they had no financial benefits, could not enjoy basic services such as drinking water and electricity, and were forced to live in overcrowded homes. Hundreds of thousands of Venezuelan citizens coexisted like forgotten ghosts who lacked social rights and considerations.

Venezuelan President Hugo Chávez passed Decree 1.666 on February 4, 2002, which refers to Land Ownership Regulations in order to stop human rights violations and also because it is in accordance with Article 182 of the Bolivarian Constitution of Venezuela, which sets forth the creation of Local Councils for Public Planning.

The Birth of Urban Land Committees

The purpose of Presidential Decree 1.666 is to regulate land ownership in poor neighborhoods and popular communities through leading participation of organized communities.

This is the reason why, Article 3.1 of the decree states: "promote citizen participation by setting up Urban Land Committees (CTU). And Article 8.3 "CTU’s will organized themselves and hold debates to define and decide the measures that must to be adopted to improve the living standards of the people who live in popular neighborhood or community".

Decree 1.666 came when inhabitants began to discuss the setting up of Urban Land Committees (CTU) in general assemblies. At the end of 2004, Venezuela counted 5,654 CTU’s which incorporated 831,138 families in an organized manner, in other words, 4,155,690 million people.

The main task of these popular organizations is to send land ownership title petitions to the National Technical Office for Land Regularization (OFNTR).

When the CTU’s were created in 2002, their first job was to conduct a census of the people who live in poor neighborhoods and communities. Every sector had an average of 200 families and they were registered by first taking into account the condition of their homes, the time of residence, socio-economic conditions, age, education level, among other factors.

"Our CTU, is made up of fifteen people. I walked the neighborhood to the conduct census to see how many people want to request land ownership titles," commented Gabriela, member from the Lídice CTU.
The consensus that was conducted in 2003-2004 was a success because 70,762 land ownership titles were granted to 532,413 people.

Their second assignment is to deal with cadastral matters. This is why CTU’s are made up of people from the community, cooperatives, geographers, city planners, engineers who come to register urban lands.

The formation of cooperatives of cadastral assistants has provided communities with benefits, generating 1,069 direct jobs and the State, which financed the registry of urban lands, has saved 65% of the cost because it did not get private companies to do the job.

The alliance between technical knowledge and popular knowledge has drawn a detailed map of all urban communities. Symbolically and politically, thousands of uninhabited square meters, which had been idle for decades, surged from the land to proclaim their existence.

Besides drawing up a detailed map of all neighborhoods of Venezuelan cities, these urban spaces stirred up some memories seeing as the great majority of these communities were illegal during previous governments; no historical monograph had been established or registered. A large portion of the Venezuelan population did not exist neither geographically nor in collective memory.

In order to solve this symbolic murder, CTU’s collected the testimonies of inhabitants to reconstitute the present identity of poor communities with history.

"We interviewed a senior citizen who has lived here for many years; she told us what this place used to look like when she arrived here. There was nothing, no water, no bathrooms. Thanks to her good memory, we could see how much the neighborhood has changed", said Luís from the Lídice CTU.

The initial objectives of CTU’s, such as conducting censuses, being responsible for cadastre matters, and bringing the historic memory back to communities, have not been completed yet. The dynamics of these organizations have made them engage in activities which they had not anticipated.

Today, CTU’s are in charge of linking the Fondo Único Social (a financial institution of the State) with families who need to do repair work or want to build their homes. CTU’s have set up a credit system with preferential interest rates so people can live in worthy and healthy conditions, thanks to the granting of land ownership titles.

Similarly, these committees are currently participating in the new social program Habitat Mission, which is aimed at giving shelter to families who were affected by the heavy rainfall or whose homes are located in high risk areas.

Thanks to Urban Land Committees and citizen participation, the majority of Venezuelans have been given back their dignity.