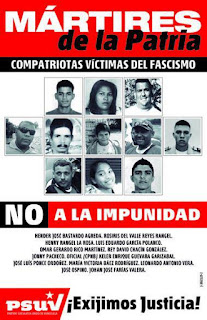 He had already announced his intentions. On April 9th, five days before the presidential election, Henrique Capriles Radonski stated: "I am not going to be the same as on October 7th, I will defend the votes." On the following day the President of the Venezuelan National Assembly, Diosdado Cabello, presented on state television proof confirming the intentions of the Venezuelan right to contest the election results with the aim of mounting a coup d’état in Venezuela. On the evening of the election, despite a difference of 272,865 votes in favor of the socialist candidate, Nicolás Maduro, the right wing candidate refused to accept his defeat. All the international observers insisted on the transparency of the election. Vicente Díaz, one of the rectors of the National Electoral Council (CNE) openly allied with the opposition parties, affirmed that he did not have "any doubt about the election result" giving the victory to the successor of Hugo Chávez.

Radonski forgot his rhetoric about unity, peace and security which he had been vociferating just one week before. He called for a mobilization of his supporters in order to obtain a total audit of the results. It was a strange democratic way of obtaining the audit by sending his extreme right wing supporters to set the streets ablaze. Venezuelan electoral law is very clear. It obliges the candidates to present before the CNE proof of fraud and in cases where this is rejected by the CNE, an appeal can be made to the Supreme Court. At the time of writing no such demand had been made to the CNE. It is true that such accusations cannot stand up to the fact that opposition witnesses designated to voting centers all over the country had already given their approval and signed off the results in their respective voting centers. But what does that matter – the aim is not to reinforce democracy but to launch a soft coup d’état in the same style as was done in Serbia, Georgia, Ukraine, Iran and Thailand, for example. The young neofascists who sowed fire and death in their country had mainly been trained in Serbia by the group Otfor and they vindicate the techniques of the Albert Einstin Institution that designed the pattern of the so-called, "color revolutions."

As soon as Radonski made his announcement neofascist groups descended on to the streets. Symbols of chavismo were destroyed; militants of the United Socialist Party of Venezuela (PSUV) were attacked and murdered; small businesses were looted and burned. There were 8 deaths and 61 wounded, mainly by gun shots. Five regional offices of the PSUV went up in flames as well as a dozen popular clinics where Cuban doctors attend the sick.

In the state of Lara, where the governor Henri Falcón is also the campaign manager of Radonski, the regional police force under Falcón’s control did not do anything to prevent the hate and destruction. During the night a grandmother called me from the regional capital of Lara, Barquisimeto: "I am barricaded in the house with my sister and some people are trying to break the door down." By the small lantern that lighted outside, she saw her own neighbors, torches in hand burn down the popular clinic that was situated in front of her house. Other comrades were also witnesses to similar incidents that they and their families lived through. These people will not make the front pages of the newspapers and there are many who had been threatened by these neofascist hordes.

The President of the Bolivarian Republic of Venezuela, Nicolás Maduro, made a call to his outraged supporters to stay calm, and not get involved in the violence and let the police and National Guard restore order. He said to Radonski : "If you do not recognize me as President, I will not recognize you as governor of Miranda state." This is a logical ultimatum since the rules by which Radonski was elected last December, are exactly the same as those that allowed Maduro to be elected President.

The wheels are turning and it does not look as if they are turning in favor of the defeated ex right wing candidate. Most world leaders have recognized Maduro as the new President of Venezuela. These include the right wing regimes of Colombia, Chile and Mexico from Latin America; the BRICS (Brazil, Russia, India, China and South Africa), several countries from Africa, as well as certain European countries such as Spain. The US, as usual, refuses to recognize the legitimate democratic process in Venezuela.

The Venezuelan military has recognized Nicolás Maduro as its new Commander-in-Chief and has thus reaffirmed its commitment to preserve peace and security. The Chief of the Strategic Operational Command, Wilmer Barrientos, has invited all Venezuelans to respect the laws and the rules of democracy.

Even if the right decides to try and keep up a strategy of tension by sending the same neofascist groups disguised in chavista red ontp the streets to place the responsibility of the violence on the government, the specter of a soft coup d’état appears to have dissipated. Nicolás Maduro will come out of this baptism of fire strengthened. On the other hand the messages of peace and unity from Radonski have exploded into a thousand pieces. People have been assassinated, wounded or beaten for having committed the outrage of not recognizing the discourse of Radonski, the person responsible for the current violence in Venezuela. The masks are now off and fascism once again has a face.


(Translated from French by Axis of Logic)