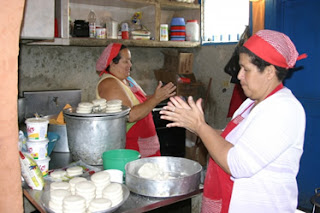 Venezuelan President Hugo Chávez announced that 7,000 food relief kitchens will be built by next semester. Three cooks from the Gramoven food relief kitchen, located in a poor community of the Caracas area, affirmed that around 160 people have lunch and dinner there everyday

According to the Food and Agriculture Organization of the United Nations (FAO), by the year 2002, 17% of the Venezuelan population suffered from malnutrition. To cure this endemic illness, the Government of Venezuela launched the creation of food relief kitchens throughout the country, now these popular kitchens are providing over 600,000 Venezuelans with two meals a day.

"They had nothing before! Many homeless people come here to eat, however, many parents come and take their meals home to their children. Children sometimes come here to eat too,” Augusta, one of the cooks from Gramoven was quoted as saying.

The Gramoven food relief kitchen was born eight months and surfaced from the needs of the community and the organization of its people. The kitchen provides the poorest sectors of the population with two meals a day. Gladys, another one of the cooks, explains: "We used to work freelance, then we decided to participate in this food relief kitchen…But, why? Well, first because we want to help the poor and second, because we want to help the Revolution, and the administration of our President”.

There were only 4,000 kitchens throughout the country before the Venezuelan President inaugurated an additional 1,000 during his radio and television program last week, and expects to build 7,000 by the end of this semester, meaning that 150,000 Venezuelans can now have two free meals a day in these facilities.

“The vegetables you see here come from the Strategic Nutrition Program (PROAL) and the meat and milk from subsidized food markets MERCAL, all free of charge,” Augusta stated.

However, the community is leading this initiative: “We started working here as volunteers ever since we found out about this place,” Soledad, the third cook said in a statement. The three cooks and all of the volunteers working at the food relief kitchen will be granted an 180,000-bolivar scholarship (US$ 84 dollars) to reinforce this initiative, as announced by the Venezuelan leader.

Two servings for the poor

Gramoven residents named their community after a flour company located there called "Harina Gramoven". The flour produced there forms part of their daily meals.

After the inauguration of the popular kitchen, the four senior citizens walked around the barrio to tell everyone that the place had opened. As time went by, more and more people started to attend. Currently, 160 people are benefiting from meals cooked by Gladys and her two companions.

The kitchen has a celestial smell to it. When I got close to the pots to see what was they were cooking, Gladys said: "We are making chicken, pasta and plantains”.

The quality of the menus called my attention. Cuban doctors from the Barrio Adentro Mission help cooks prepare the menus, which contribute with 65% of the calories and proteins necessary for proper healthcare. Every meal includes a glass of milk to combat calcium deficiencies.

In September 2004, when Brazilian President Luiz Ignacio da Silva submitted his “Zero Hunger” program before the United Nations, he used the Venezuelan experience as an example by stating: "To eradicate poverty and famine around the world, power must be given to the poor”. Everyday, when Gladys, Augusta and Soledad cook for the poorest sectors of the population, they confirm the relevancy of these words.