Chávez, Anti-Semitism and Misinformation Campaign: a Defamatory Article by Libération 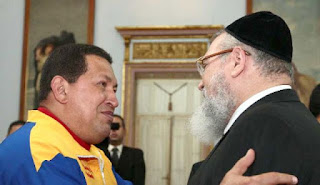 After reading Jean Hebert Armengaud’s article, “le credo anti-Semite de Hugo Chávez” (Libération, January 9, 2006), I started questioning myself: ¿Would I live in a country whose democratically elected president stigmatizes a sector of its population because of religious matters? ¿Is the Chavismo an anti-Semitic political movement? ¿Have I become so blind that I can not see the Bolivarian pogroms? ¿Have I become so deaf that I can not listen to the appeals for hate shouted by the government?

My personal doubts became clear as soon as I read the name of the author under the article’s headline published by Libération. For a long time, Jean Hébert Armengaud has stood out for making the most aggressive accusations against the Bolivarian government. I immediately got rid of my doubts and started focusing on the authenticity of the interpretation that this journalist made of his sources. That is, according to his very personal definition and praxis of professional deontology.

This is not a trivial matter. Chávez is defined as a huge anti-Semitic that uses the worst stereotypes against those who follow Judaism; and he does this by following the lines of the “protocols of the learned elders of Zion.”

The Libération’s journalist tells us that the crime took place the day before Christmas, when “Hugo Chávez visited a center for housing and rehabilitating homeless people in Miranda, Zulia state.” On December 24, - accompanied by the Mayor of Caracas and one of his ministers – Venezuela’s president was visiting an Endogenous Development Center (Bolivarian model for an alternative economy) located near Acevedo, in Miranda state. The Endogenous Development Center is not a center for housing and rehabilitating homeless at all; furthermore, Miranda state can not be in Zulia state. This geographic accuracy may seem useless for French readers, but it is a proof of what Mr. Armangaud knows about the Bolivarian country, and it demonstrates his competence in verifying his sources. This is much more alarming than what this article’s author deduces when he invites his readers to access the web page of the Venezuelan Ministry of Communication and Information so that they can see with their own eyes the anti-Semitic insanity of Hugo Chávez. We have followed his advice. The web page containing the incriminatory speech shows the geographic information we just mentioned.

So, whether Mr. Armangaud has not verified his source or his Spanish competence is somewhat poor. In both scenarios, we can notice the exactness of his investigation. ¿What is he going to tell about President Chávez’ anti-Semitism if misinformation stars showing up when he deals with minor topics?

First, we must point out that Jesus Christ made a comeback in President Chávez’ speeches. Chávez always referred to Jesus Christ at the beginning of his term of office. The French people that follow the Bolivarian process would have been surprised during his meeting in Paris - held in the town hall of district II – if they would have listened to Chávez when he said: “Jesus Christ was the first socialist, and Judas the first capitalist.” These words – difficult to understand from an atheistic point of view – cause a big stir on this part of the pond. Also, Chávez’ Christ has more to do with the theologists of liberation’s Christ than with the Benedict XVI’s Christ. It is about a Christianity that supports the poor, a human Christianity that opens the door to an earthly and long-term joy.

Latin America’s history contains this theological division. Many Salvadorian Jesuits, many revolutionary Guatemalan and Peruvian priests have paid with their lives their fight next to the poorest ones. On the contrary, the ecclesiastical hierarchy has often accompanied the extremist right-wing dictatorships that the continent has suffered. Talking about a revolutionary or socialist Christ is making religious feelings participate in the ideological war. Through theology, Christ expresses his will of fighting the domination of the powerful ones. Chávez made use of Christ in this sense. The address delivered by Chávez on December 24 is about the new use of the religious stories in the president’s speeches.

¿What did Hugo Chávez say on Christmas’ eve? Libération’s journalist can calmly say that this speech can be found in the Ministry’s web site; it is true. However, ¿how many readers that still trust Libération are going to examine a 26-page document in Spanish to corroborate its truth or falsehood? For those who feel appealed by this investigative task, you can find the above-mentioned excerpt after page 15. But for each one of you to realize the alleged “anti-Semitic” ideology of the Venezuelan president, we quoted the address:

“I jus read this morning the last report of the United Nations Organization on the world’s situation and it is alarming. That is why I say that today, as never before, we need Jesus Christ, because the world is coming to an end. God and nature are wise. There is enough water in the world for all of us; there is enough wealth in the world. There is enough land to produce food for the entire world’s population. There are enough stones and minerals for building, so that no one is homeless. There are enough resources in the world for all of us. But some minorities, the descendants of the same ones who crucified Christ, the descendants of the same ones who threw out (South American Liberator Simón) Bolívar from here and also crucified him in a way in Santa Marta, over there in Colombia. A minority took possession of all the planet’s gold, of the silver, the minerals, the waters, the good land, the oil, the riches, and they have concentrated the riches in few hands. Less than 10 per cent of the world’s population possesses over half of the world’s riches, and more than a half of the planet’s population is poor, and every day there are more poors in the world. We are determined, we are determined to change the history, and every day more and more Heads of States and leaders walk with us and will walk with us.”

You can notice we have not use parentheses (…), which is by the way a resource very used by journalists like Armangaud. This resource allows doctoring the original speech, modifying the meaning or even distorting the message, just as they do on television.

Chávez is commenting on an ONU report about the world’s situation. This excerpt is aimed to condemn the personal taking over the world’s riches because “SOME MINORITIES” have taken possession of these riches by stealing the majorities since Jesus Christ time.

We must warn that – in his rush for discrediting Venezuela’s President – the journalist fell into a translation mistake. “Some minorities” is translated as “des minorities”. That is, different empires, superpowers and bourgeois classes that took possession throughout centuries of what some call world public properties. That is to say, the Roman Empire that sentenced Christ to death, the Venezuelan oligarchy that let Bolivar die when he did not even own a shirt, or the capitalist bourgeoisie that owns the subsoil of our planet.

Chávez’ speech is clearly anti-imperialist and anti-neoliberal, but it is an undeniable mistake to describe it as anti-Semitic just because Mr. Armangaud does not know the topic he deals with in his article.

On the other hand, it is the very same Libération’s journalist who highlights the anti-Semitic stereotype in order to discredit Chávez. Jean Hebert Armangaud triggers the anti-Semitic feeling in a French society that is not aware of it by doctoring and distorting the President’s speech. Talking about a minority that killed Jesus Christ and that possesses the world’s riches barely refers to the Jewish community. This journalist shows to the readers that anti-Semitism has become a reference to this religious community. He does this by depriving the excerpt of its meaning and context.

However, he thinks he is right about Chávez’ speech and persists. Then, he accuses Chávez’ government of persecuting the Jewish community by asking prosecutors to do their jobs in a Hebraic center. When we read this accusation, the Night of Broken Glass and all the shameful things that Europe did against Jewish communities immediately came to our minds. Nevertheless, this happened when Danilo Anderson, the public prosecutor in charge of the 2002 cup d’etat cases, was killed. No one blamed Jewish people for Danilo Anderson’s death, and no Jewish person in the Hebraic center – suspected of being related to the Mossad –will be blamed. Prosecutors do not take into account the ethnic or religious origins of the public prosecutor’s killers.

Armangaud does not care about hidden lies. If you tell a lie thousand times, it will become true.

Armangaud does not mind that the Venezuelan government was one of the first to criticize Iranian president, Mahmoud Ahmadinejah, called on Israel to be wiped off the face of the earth.

This campaign aiming to the alleged Chávez’ anti-Semitism shows us a new slanderous campaign and a new trend in the rubbish journalism in France. The following are some of the mechanisms used by some dishonest journalists: they ignore original sources; they distort reports and other documents in order to relate them to ideological purposes, and they do not acquire the proper knowledge of the field and topic they deal with.

By putting up with this ignorance, the dangerous poison of misinformation spreads with pleasure.