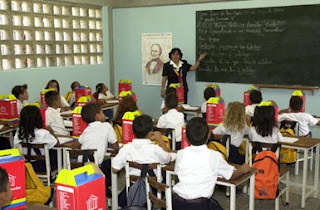 When the Bolivarian Government took office in 1999, Venezuelas public education system was completely ruined. From that moment, the present regime has stepped up efforts to find effective and practical solutions to optimize the level of education of the great majority of Venezuelan children. After multiple efforts and an investment of more than 2 million dollars, at the end of the 2005 school year, 789,000 children from the 3,807 Bolivarian Schools throughout the country benefited from free and quality education

739,000 elementary school children are currently benefiting from an integral and totally free education system in Venezuela. Through Bolivarian Schools, Venezuela is beginning to rebuild its public education system which had been totally disassembled after years of abandonment and financial decentralization, and excluded the poorest sectors of the population from quality education.

When the Bolivarian Government took office in 1999, one of its priorities was to solve this structural problem. Five billion bolivares (US$ 2,326,000) have been invested to date to consolidate this new education system, whose success has been reflected on the performance of the 3,807 Bolivarian Schools.

These Bolivarian Schools are an experimental design whose vision is to extend this practice to all the public schools in the country.

The opposition has criticized this free and quality public service and accused the Ministry of Education and Sports (MED) of ideologizing and indoctrinating Venezuelan children and not having a quality control plan for the three free meals children receive at the Bolivarian Schools.
(www.analitica.com/va/sociedad/educacion/9497028.asp.) (http://buscador.eluniversal.com/2005/06/17/ccs_art_17478G.shtml)

To prove these accusations false, one only has to look at the educational programs, subjects and dynamics of the classes taught at these schools. To stimulate reflection, learning and investigation is definitively not a technique of ideologization. And according to the dictionary, to stimulate brotherhood and solidarity, through sociocultural activities and sports, cannot be considered ideologization either.

The content of the courses highlights national history and native culture because the idea is to build a true national identity and prevent the transculturization promoted by globalization.

There is a library in every Bolivarian school, children can find books of Venezuelan and writers from across the globe who give life to imagination and promote reflection among the children and parents of Bolivarian Schools.

Distributed education allows all students to have a critical sense and sensitivity towards social changes. These are the true foundations of citizen education in a country in revolution.

Through the School Food Program sponsored by the Ministry of Education and Sports (MED), Venezuelan children get breakfast, lunch, and a snack everyday in order to provide them with balanced meals which are good for their development and to help their families reduce costs.

Oscar Negrin is the former coordinator of the Juan Alberdi Baptist School, located in the Manicomio sector in Caracas. Today, this school is functioning like a Bolivarian School and 380 children currently form part of it. "The school is open 18 hours a day, the community has taken over it and now it has become the place for everyone. The Robinson, Ribas, and Barrio Adentro missions are installed here. We have also installed a computer room. During the day, children take computer science courses and at the end of the afternoon, the community begins to benefit from this service", stated Negrin.

The objective of all these programs is to integrate the community in a social network that revolves around education, culture and health.

Sara, a Cuban dentist, whose clinic is installed at the Alberdi school says: "We are 15 Cuban doctors, dentists, and trainers. Children started taking physical education when members of the community fixed the sports field ".

This place of participatory education seems to be the right answer to what Rodríguez, the teacher of Simón Bolivar, once said to him: "Ignorant peoples are a blind instrument of its own destruction". Nowadays, the eyes of Venezuelans are wide open and focused on building a better future.