40,000 are benefiting from the Fabricio Ojeda Endogenous Development Nucleus 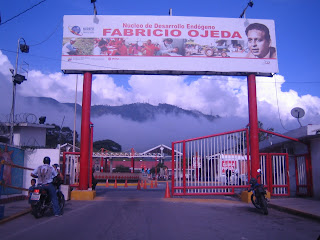 With a popular clinic, 2 drugstores, 3 cooperatives, a subsidized supermarket, recreational areas the Fabricio Ojeda Endogenous Development Nucleus constitutes a model of community self-management. Its second phase confirms the success of this project, seeing as a Bolivarian School, a soup kitchen, a kindergarten, and other facilities are expected to be built


A long line of people patiently wait for the Fabricio Ojeda Endogenous Nucleus to open its doors. Mothers, co-op workers, students, unemployed workers and others, are waiting to work at the social projects carried out there.

Located on the hills of a poor community in Caracas called Catia, over 40 thousand families take advantage of the benefits of Fabricio Ojeda Endogenous Nucleus; a social and political space that symbolizes the way communities are taking command of their own future. Backed by the government, families in the sector have attained their autonomy in this new structure, “it’s a place where power is transferred,” expressed Wilkelman Angél, the coordinator of the Fabricio Ojeda Nucleus.

Before, this space used to be a fuel depot owned and abandoned by Venezuelan state oil corporation Petróleos de Venezuela (PDVSA) 12 years ago. However, at the end of 2003, Venezuelan President Hugo Chávez laid out a framework for the construction of an endogenous development nucleus there, a project aimed at turning itself into the spearhead of a new model for economic development.

The community of Catia held a general assembly to democratically decide on how the center should be built. The first stone of the Fabricio Ojeda Endogenous Nucleus was set on May 24, 2004.

The center was built by community cooperatives and Venezuelan Army engineers. Juan Perales, a member of one of the cooperatives said: “this nucleus is the result of civil-military union, our cooperative, and the work carried out by military engineers, who set the foundations and built 80% of the sports centers”.

Under this plan, the second phase of Fabricio Ojeda is being developed. It will have a Bolivarian school, a soup kitchen, a Simoncito kindergarten (a government plan that includes pre-school education and kitchen), a cafeteria and an auditorium.

“My son is very ill, I wouldn’t be able to purchase the medicine if it were not for this drugstore”, stated Carmen a neighbor from Catia while she was buying medicine from one of the two popular drugstores that the Fabricio Ojeda Endogenous Nucleus has. Around 210 people visit it everyday and customers obtain discounts of up to 85% on medicine.

One of the drugstores is located next to a big building in Catia and inside it is a Barrio Adentro II popular clinic. The clinic treats patients who could not be treated at the Barrio Adentro I healthcare program and provides them with state-of-the-art medical equipment, medicine, a laboratory, specialists in the areas of pediatrics, gynecology, traumatology, X-Rays and odontology. Around 92 Catia residents work at the clinic and treat more than 150 patients a day.

Within the framework of Barrio Adentro, Fabricio Ojeda provides citizens who want to have a healthy mind in a healthy body with sports centers and recreation as it also forms part of the healthcare program.

The first phase of the nucleus is made up of three cooperatives; workers from these associations have been trained in their specific areas. The purpose of the program is to train people so they can later get a job. Around 286,000 Vuelvan Caras members were able to get jobs in 6,096 cooperatives after they completed their training.

The Cipriano Castro Cooperative, made up of 200 members, is an agricultural association which executes its work on a hill beside the nucleus. Its production is not for sale, but the experience helps train farmers.

During our visit, workers from the Venezuela Avanza cooperative were gathered together in a general assembly. “This not just any ordinary meeting,” said Wikelman, “most women have not had access to the administration department of their company and here they can learn how to speak in public and run their association”.

The chain of production of these two cooperatives was sponsored by PDVSA. In this regard, Eleana, a member of the Nuenfao cooperative told us that it is not clear whether the machinery provided by the state oil industry will be sold to our cooperative, or when or how much they will cost. “The most important thing is that we can now get to work,” he stated.


Solidarity and participation before anything

A long line of students patiently wait for the Fabricio Ojeda Endogenous Nucleus to open its doors so they can purchase their student transportation tickets with a discount of 75%.

On another note, a Súper Mercal was also installed in this nucleus; where more than 600 people come to purchase basic food products.

The government-sponsored food-chain was born following the 2003 oil industry work stoppage-sabotage which affected the supply of basic food products in the country.

These food networks allow cooperatives to sell their products with a 50% discount compared to the price of products manufactured by transnational companies.

Not too far away from Súper Mercal, in the center of the complex, there is a Community Center: a space where people from the community convene to find solutions to the problems of their community and share ideas. It is a place where citizens can express their opinions and participate in the projects underway. The Fabricio Ojeda Endogenous Nucleus usually holds a general assembly on Wednesdays; during which cultural events take place and local organizations hold meetings.

Endogenous development is an alternative economic system which aims to diversify the Venezuelan economy by reducing the dependence on oil. This new economic model includes an active role by the community in order to promote the structural transformation of the country. The decisions are taken from within the communities in order to improve everyone’s quality of life, preserve the environment and guarantee the population’s welfare.


The endogenous development nuclei are conceived by the people, for the people and with the people. Watching how people in the communities take command of their own spaces is a clear example. There was a man who littered inside the nucleus and three women who had seen him approached him and reprimanded him, “what are you doing? If we don’t take care of our own spaces, who will?” one of them exclaimed. Ashamed, the man picked up the litter and said, “Sorry, I was not thinking.”